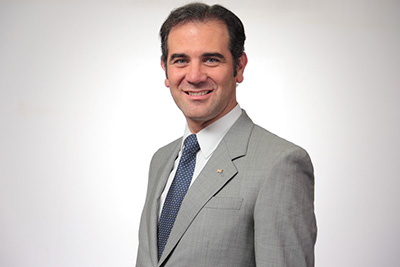 Graduate in Law from the National Autonomous University of Mexico (UNAM) and Doctor of Research in Political Theory from the University of Turin, Italy.

He is a full-time “B” researcher at the UNAM’s Law Research Institute, where he was coordinator of the Electoral Law area. The National System of Researchers (SNI) grants him as National Researcher, Level III.

He is the author of several books and articles on electoral, constitutional and political theory topics. Author, co-author or coordinator of more than a dozen books, the most recent of which is La democracia no se toca, co-authored with Ciro Murayama (Planeta, México 2023). Also noteworthy are La democracia no se construyó en un día, co-authored with Ernesto Nuñez (Grijalbo, Mexico, 2021) and Derecho y Poder. Kelsen y Schmitt frente a frente (Fondo de Cultura Económica, 2009).

He is columnist for the newspaper El Universal and a contributor to several specialized journals. He has served on the editorial boards of various periodicals.

He is professor at the UNAM Law School where he teaches Theory of the Constitution and Constitutional Law.

In 2010 the UNAM recognized him with the National University Award for Young Academics.

He has been the host of numerous television programs in both public and private media.

On two occasions (2009 and 2011) he has received the National Journalism Award from the Club of Journalists of Mexico.

On December 15, 2011, he was appointed by the Chamber of Deputies as Electoral Counselor of the Federal Electoral Institute.

That Chamber appointed him President Counselor of the National Electoral Institute (INE) for the period 2014-2023.